Something new here, but I'm just gonna go ahead anyway.

I have bought Hasegawas 1/72 scale model it of the Razgriz F-14A Tomcat (Seen in Ace Combat 5). I haven't build a scale model since 4 years or so, so I had to get into it again and also made some flaws, but the outcome is pretty satisfying.

We start off with a picture of the finished model and then I will break it down a bit. 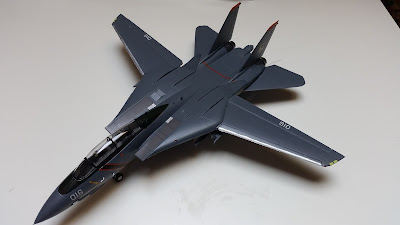 First things first: I had to import this kit from the USA to Germany, since there are pretty much only US and japanese retailers who sell these Ace Combat models. It was close to 25$ for the kit and in my opinion, that's a very fair price considering what the kit has got to offer. However, I have seen a few of the AC kits (Like Mobius' F-22A) becoming very expensive, so if you're thinking about getting an Ace Combat, I suggest you do it now. (F-15C Galm 1&2 and Garuda are already on their way to my home). I do have to say that I recommend to have at least a little experience before buying and building this kit. Some parts are really small and you should also be familiar with painting, applying decals and such. The F-14A in particular is one of the harder kits in the series.

Anyway, let's talk about what the kit contains: 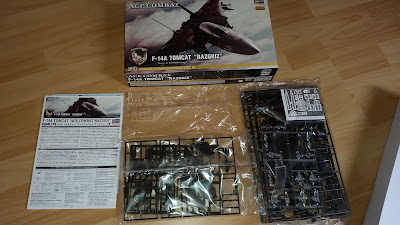 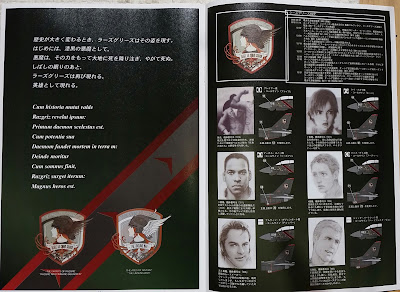 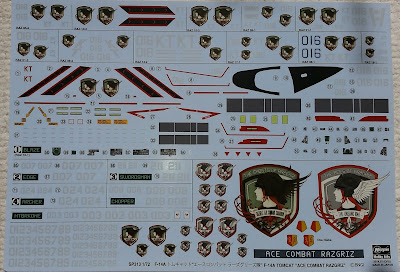 What I have noticed right from the beginning is that the kit comes with photo-etched parts for the cockpit, engine and canopy. I think this was a really nice surprise, because (just for example) my Revell F-14D in 1/72 didn't have this and those parts help to bring some great detail for the finished product.
Then there are also parts to build a display stand (Gonna show that in the end as well) to make your plane look like it's flying or taking off or something like that. These stands are included with all Ace Combat kits and the decal sheet features emblems of the particular squadrons you can put onto the stand.
Speaking of the decal sheet:
You think you're just going to build a Razgriz F-14A? Well... The decal sheet says otherwise and delivers you decals to also make an F-35C, F-14D, Su-27, F-22A and a few more in Razgriz colors. You have to buy a seperate 1/72 kit for the plane, sure. But 1/72 Tomcats or Fighting Falcons can be found for 10$. You could (in theory) build yourself a nice 4-man squadron with different Razgriz planes. The sheet also offers different numerations for the F-14A (see manual pic). You can display any squadron member of Ace Combat 5, which I think is pretty neat.

So, the building process. Like pretty much every aircraft model kit, you have to start with the cockpit. Build and paint the ejection seats, paint the cockpit hull, fit into the panels (either as decals or photo etched parts) and paint the screens, flightstick, etc. I can tell you once thing: These parts are really really small. Especially the ejection seat levers on top of the seat. (And you actually have to paint those things yellow and black). I really have no clue how one is supposed to properly do it like in the manual, but it also looks good if you just paint them yellow and just make some black dots on it with a brush. 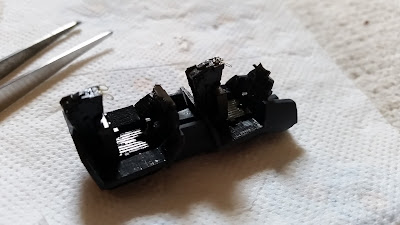 After the cockpit is built and painted, you will have to fit into the front section of the aircraft. I really advise using something that makes the two halfes of the plane stick together (like in my photo) or otherwise they will probably distance themselves from each other when the glue is still drying. 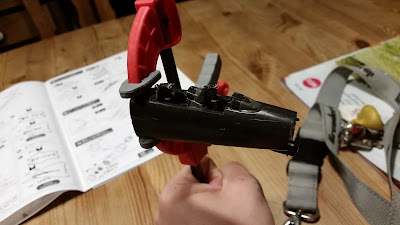 The next part is the main body. The rear compartment with the arresting hook and airbrakes, the engine intakes and the actual body have to be build seperately. Before putting all the parts together, you have to paint the gear boxes and inner parts of the intake white (After you have put it together it would be pretty hard to paint these things, so I prefer doing it beforehand). Let the paint dry and then put it all together to have the main body. Again, make sure the parts are kept together during the drying process.
Worth nothing is that there was lots of unused plastic attached to the main body parts, which you had to remove carefully with a sharp knife. I say "carefully" because you don't want to cut into the actual mold by mistake. (I have done this before on an F/A-18) 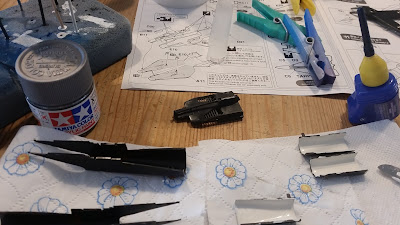 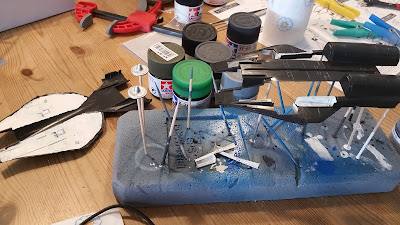 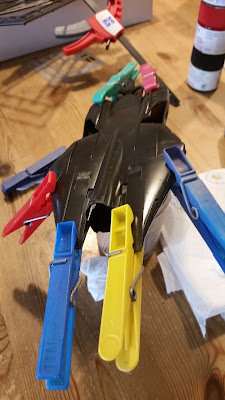 Here I differ a bit from what the manual actually said, but I found it to be better that way. Actually in the following state, the engines in the rear and exhausts are supposed to be already fitted into the aircraft. But since they're painted in a different color than the main body, I decided to first paint the plane and engines seperately, then put them together.
To prevent the cockpit from being painted over by the body color, I have used to tape so seal it off. It wasn't easy to exactly and only tape the cockpit, but in the end I somehow managed to do it. 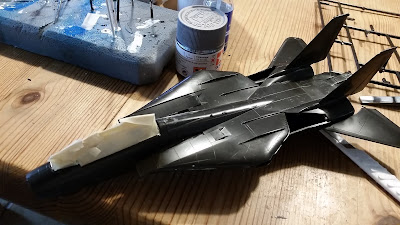 Before putting on the actual paint scheme, some primer is used. "But why?" you may ask. Well, from my experience, the paint sticks better to the model if you have used primer on it before. And secondly, you can make sure that every part of the plane has been painted. (You can't really make out dark grey on black surface). Below you can see the body, wings and the wheels.
Speaking of the wings, it's amazing what you can do with them. You can display it normally with everything in it's place or you can show it with either slats, flaps or both of them extended. 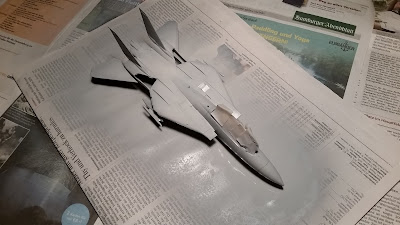 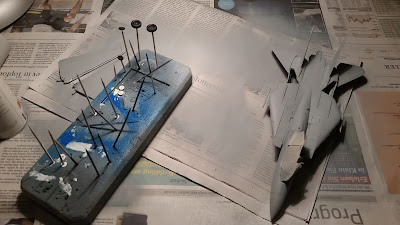 Now here comes the part where I am telling you: Do not listen to what the manual tells you. German gray as body color is way too bright for the Razgriz aircraft. Pure black would have been too dark, but I'm sure there is something in between. However, since the plane already had 3 layers of paint on it (Primer+2x german gray) I decided not to paint it a fourth time, since the panel lines were already vanishing. 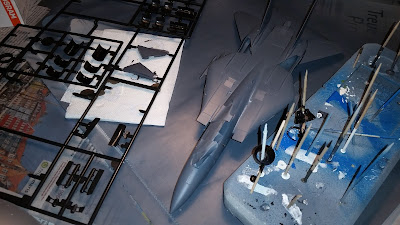 The painted plane put together with the wings and canopy. Here is something that I liked regarding the Revell F-14: You were able to move the wings back and forth. Unfortuantely you have decide while building this kit, whether you want to display the Tomcat with folded or extended wings. 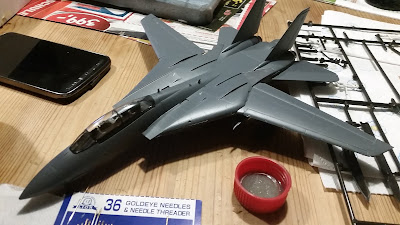 The last thing regarding building is adding the gear and some smaller stuff like antennas, navigational lights and the hatches for the gear (You have to choose whether you want to have the gear out or not) 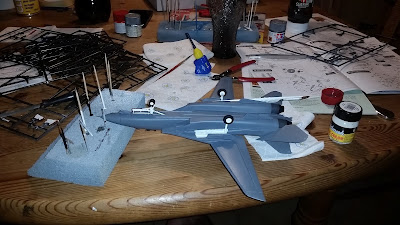 This is the plane pretty much in a finished state, minus navigational lights and pitot installations. 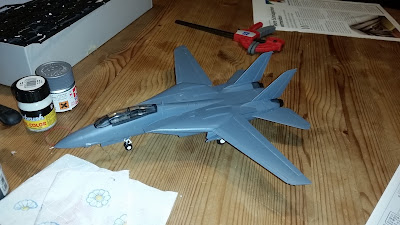 After applying the decals with warm water and and a decal softener the only things missing are the nav lights. And I have to say, even though it is a bit to bright it doesn't look bad at all. 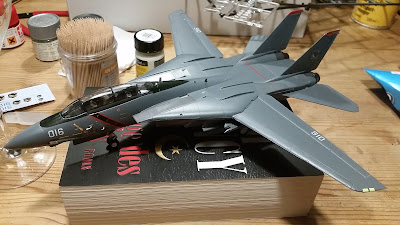 And here we have the finished model, along with its display stand. 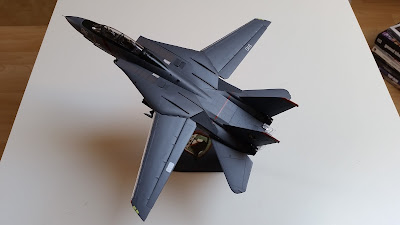 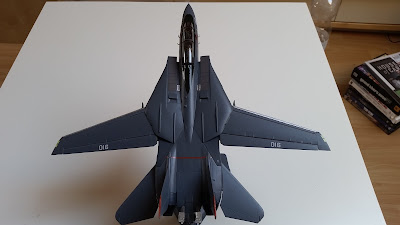 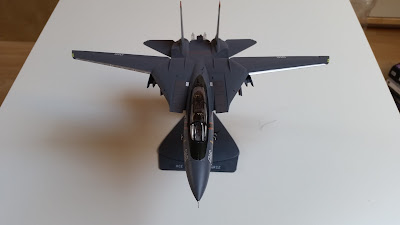 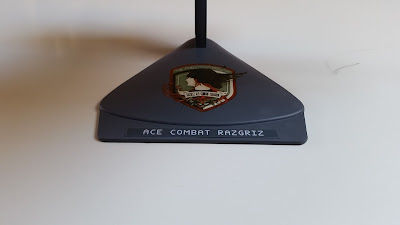 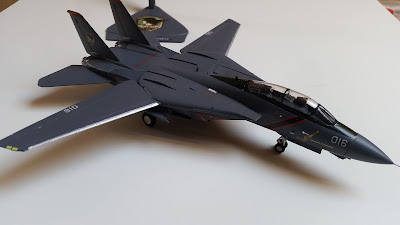 I have to say that I do not regret buying this at all. The parts fit good (most of the time), manual is easy to follow, although I have switched some steps, but that comes down to personal preference. The decals have one of the best qualities I have seen (Speaking of the sets which are delivered with the kit itself). I have had an F-14D from Hasegawa where the decals weren't really all that great, but this kit was a really positive surprise. I can really recommend this kit and can't wait for other Ace Combat kits.